The new brooder, First day outside, They sleep like the dead

I love having a handy hubby. Any time I need something built or fixed, he's right there to make it happen. The  chicks are not so little fluff balls anymore. The creepy meats are looking downright creepy, all half feathered and loosing their down. There is starting to be a bit of a size difference between the creepy meats and the hopeful pullets. I'm pretty sure one of them is going to be a rooster. 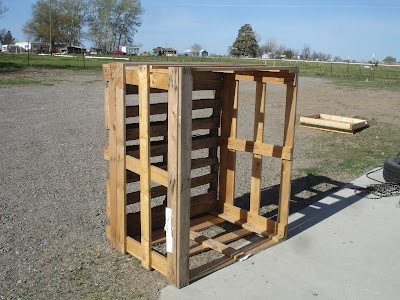 We've had this crate that Scott brought home from work, hanging around out in the yard for about a year. I saw a potential chicken/chick pen, Scott was thinking a compost crate. It's sat and we've done nothing with it. We walked out in the garage last week and one of the creepy meats had it's head poking out the chicken wire on top of the water trough/brooder. It was time for a bigger enclosure. 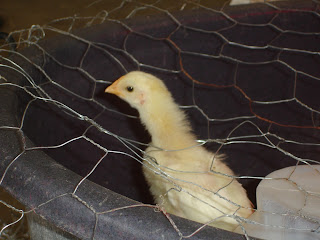 Scott and I brought the crate into the garage and cleaned it up. Got rid of the spider webs, dirt and crud. 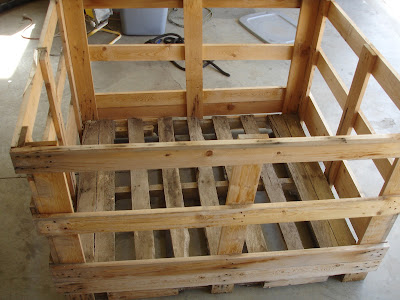 There's been some old pieces of plywood hanging out under a tarp behind the wood pile, just waiting to be put to some use. One piece was just about the perfect size for the floor. 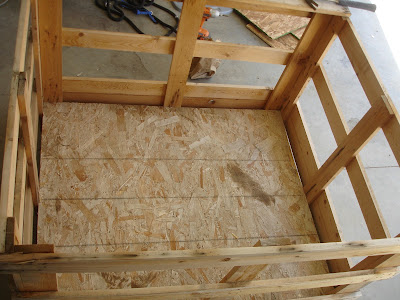 Scott took a grinder and smoothed off all the sharp points from the nails holding the crate together. 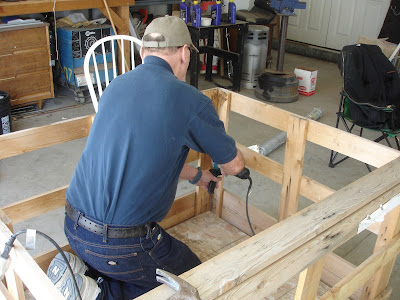 There was a gap between the slats of the crate and the inner supports. Some pallets Liam, Uncle Jeff, and Scott took apart provided the 2x6's he fixed to the inside to keep the shavings and the chicks from falling out. 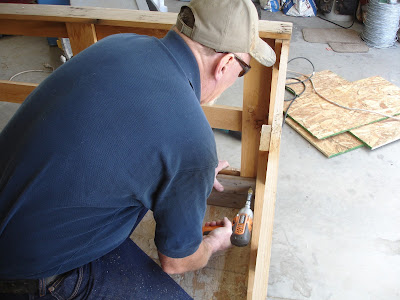 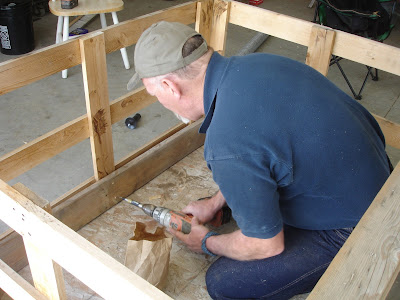 The smaller holed chicken wire was the only purchased part to this project. Scott stapled it to the outside while I stretched it. (Or took pictures) 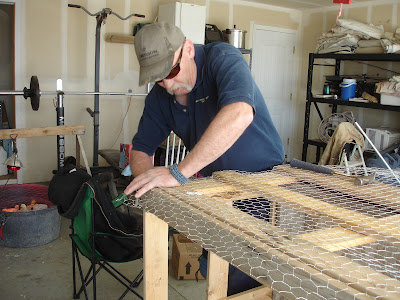 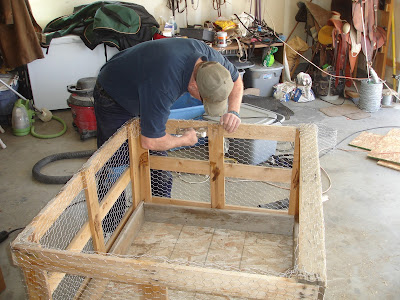 The new brooder was moved into place and shavings added. It takes a bit more shavings, they have a lot more room. 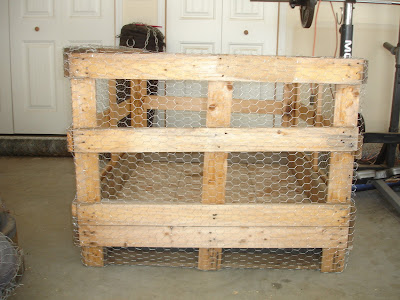 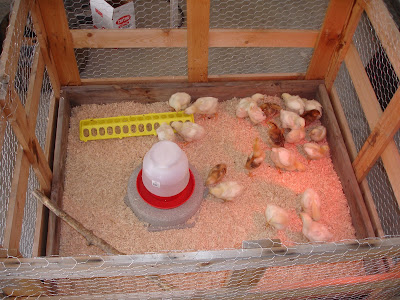 A couple of sticks from the trees for perches and we have happy chickens. 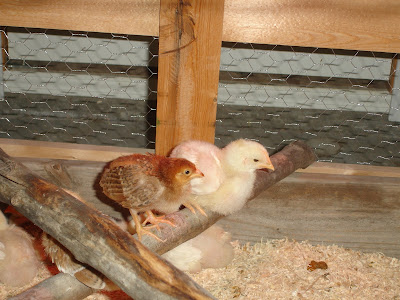 Today was their first day out side. The creepy meats are down right ugly. 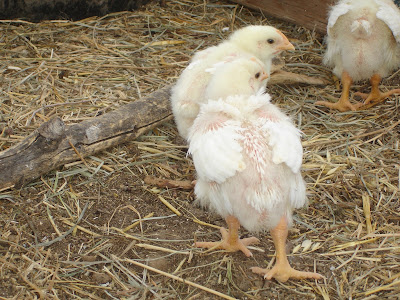 I have one tiny little red pullet. She is the pluckiest chick too. Her tail sticks straight up in the air and that made me think rooster, but her wings and tail feathers grew in faster than the other chicks' and I don't see the beginnings of bright red waddles like I do on one of the bigger pullet candidates. 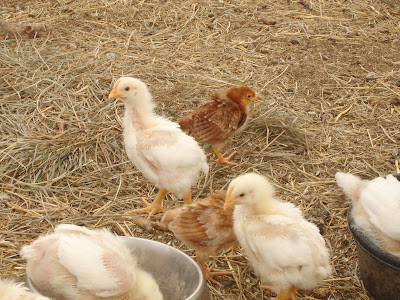 I put up some old warped boards around the inside of the big chicken's run and turned em loose. 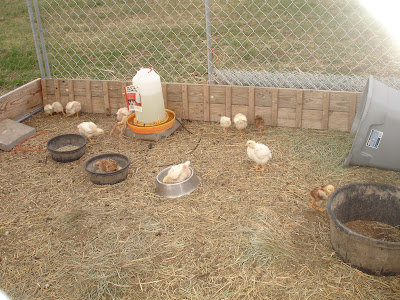 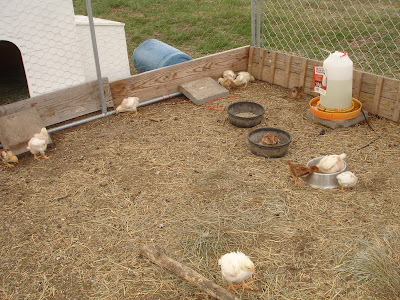 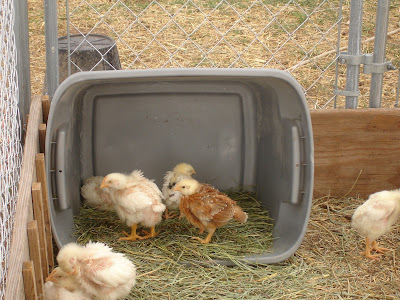 One of the older girls looking in and wondering why she has to use the barrel nest box outside the run. 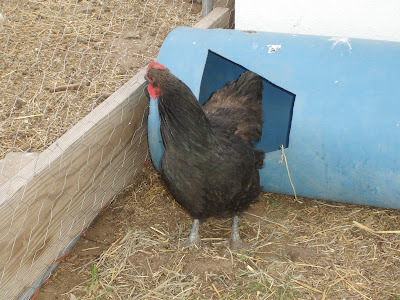 If you've never seen these little puff balls sleep before, don't be alarmed if you wander out and look in the brooder while they are sleeping. You might think you have a whole pen full of dead chicks. This is how you think of them sleeping. All cute and roosting on a stick. 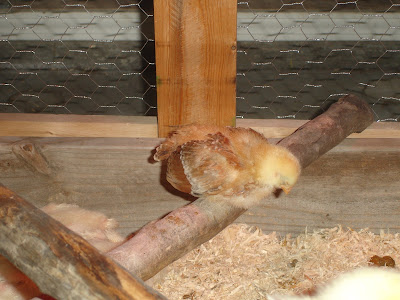 This is what you really see. Necks stretched out, flat little dead birds. 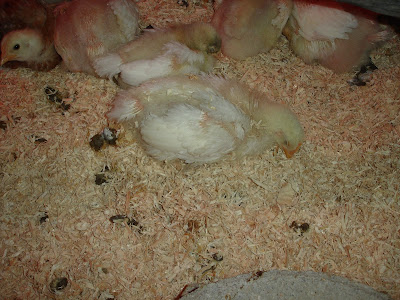 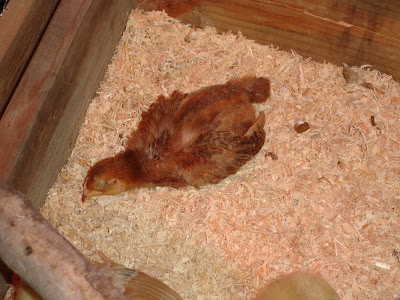 And then as soon as you gasp in dismay, and moan, "Oh No!" They all pop up cheeping and complaining that you interrupted their nap. And dang it lady, where's the bleeping food?!

Posted by EverStuff Shrimp at 6:24 PM

Email ThisBlogThis!Share to TwitterShare to FacebookShare to Pinterest
Labels: Around the farm, Brooder, Chicks

Try these other posts

Seriously, Idaho? If you see anything you like, become a follower. I'm always putting up new stuff